Desperate Plea to Obama from a Rohingya Refugee in Burma 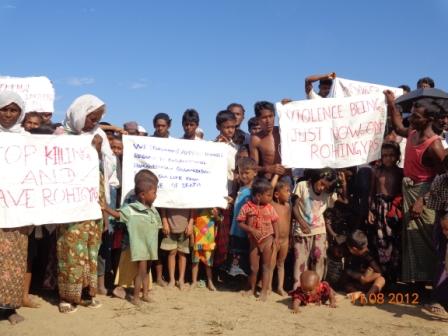 The following letter was received from @aungaungsittwe the only Rohingya refugee tweeting daily updates from the ground in Burma/Myanmar.

I am a refugee; a victim of the Burmese regime and Rakhine authority. I have been writing articles for Tim King of Salem News since June regarding the violence in the Arakan State.

We the Rohingya people welcome you warmly and are highly grateful for your visit to our country; it is essential for the transition to democracy in Burma.

When you were elected the first time, I was one of the happiest people because it signified a new page not only in American history but also in modern historical records, an expansion of the definition of democracy, a model for a multi-cultural society.

After the Second World War, Cold War and other ideological clashes that caused the loss of millions of lives all over the world, natural disasters swept away the lives of millions more and an increase in the world's population saw a thirst for the pure water of peace and justice. Ultra-nationalism, racism, fascism, communism, terrorism, socialism and dictatorship are nowhere welcomed by modern man. The majority of scholars believe that democracy is the best solution for us all.

Increasing populations, advancing technology, shrinking resources, access to information and knowledge plus competing economies now challenge world leaders to solve various problems. It is time now for world leaders to reflect on their capacity regarding world peace and justice.

The United States of America became a single superpower which could lead the world towards globalisation, internationalism and peaceful cooperation. I wish you will be able to give a speech to the world about peace as this coming New Year's greeting.


Every deed results in a consequence and every person should get his or her wages at the end of their work. 'You work we benefit' is a communist mentality.

Before British colonization, Burma had nothing: no proper education system, no suitable communication system, isolated from the rest of the world. When American people were celebrating their 111th year of independence, Burma became a colony of the British. With the help of the British, the Burmese were introduced to the Western concept of democracy.

After independence, Burma became a parliamentary democratic country during which period Burma became like a tiger in the Asian region. But unfortunately, when dictator Ne Win took power, slowly it became one of the poorest countries in the world.


We the Rohingya, an indigenous group, are treated inhumanely in this country. One would hope at this rare opportunity to highlight some important issues, that I hope may be included as serious negotiation points with the Burmese high ranking officials and decision making bodies within the mission of the United States. Our lives in the Rakhine state are currently unbearable, we are completely helpless human beings. Since I believe the details of the Rohingya situation are already known by US officials, I will simply highlight some points in brief on behalf of my people:

We the Rohingya have been living under the shadow of fear and terror, oppression, exploitation, injustice, unfairness, prejudice, extrajudicial punishment, racial discrimination and other countless inhuman mistreatment,  which are a combination of works from both Rakhine chauvinists and the Union  government, for more than sixty long years in areas such as job employment, opportunities, health care, social work, land check points, steamer and boat ports, mountain passes, airports,  immigration offices, municipal offices, revenue offices, education departments, farmlands, distributions and so on.

Because of more than 6 decades long of oppressive ruling circumstances and regrettably, racially designed ethnic cleansing operations under several banners sponsored by the Burmese successive governments and aided by Rakhine ultra-nationalists, this has resulted in the forced exodus of more than one million Rohingya Muslims who sought refuge outside Burma,  the internal dislocation of at least 2/3 million, and the death of another 100,000 as per the universal declaration of human rights.


Whilst Rohingya people have been loving the Rakhine brothers and sisters as their own, few Rakhine nationalists from either part of the state have shown common respect, feelings of love, ample sympathy, communal understanding and equal recognition to the Rohingya people throughout history.  Now it is time for Rakhine nationalists to learn. People such as politicians, historians, scholars, government staff, students, school teachers, open-minded monks and all community relevant dignitaries, must learn how  to  step  closer  to  build  constructive  approaches  as per the advice of international organizations and the dignitaries who have recently paid goodwill visits to Myanmar including the Secretary of State Hilary Clinton and Prime Minister Sheik Hasina of Bangladesh.

Today  the entire  Rohingya  people  are  afraid  of  being  harassed,  physically  tortured, molested, and burned, looted and persecuted, and they fear their villages and belongings being set on fire due to the absence of fair security provided by the Union of the Central Government, where only Rakhine police are  equipped by weapons in the Rohingya populated areas in Rakhine state.

Since May 2012,  the Burmese regime and Rakhine State authority have been continuously killing the Rohingya , burning their houses, looting their properties that caused 150,000 IDP refugees, and nearly one million people are now living under a blockade and are facing starvation. The regime implements a new type of terrorism, fascism, and Buddhist ultra-nationalism in the name of the democracy process.

President Thein Sein opposed international humanitarian aids pointing to public desire as his excuse. The word democracy is being misused against democracy. With the votes of 60%, killing the 10% minority becomes legal according to Thein Sein's government.


In the Burmese democratic process, thousands of Rohingya lives, properties, and rights have being sacrificed, and yet the Rohingya issue was the first issue which pushed international human rights activists to put pressure on the regime towards democracy.

President Obama, you have the power of eloquence, intellectual and technical methods to solve this issue easily. As a world leader, I believe you could help resolve this issue and in doing so you would be a role model for the rest of the world.

I personally beg you and your government to save the Rohingya people and help remove racism from Burma, which results in terrible acts both regionally and internationally.

I believe the lives of the Rohingya in Arakan State are as bad as the lives of those in the concentration camps of Hitler. Could you please come and have a look at us?  We believe that your visit could help change the course of world history especially in regards to Southeast Asian regional developments.


Copyright notice:  Please share and reprint this letter as you wish.